The first time I ever played in a gas mask was when I met my current partner for the very first time.  I had a rubber Russian one (well I think it was Russian!) amongst my gear but for some reason had never used it.  I think it had to do with the fact I'm Asthmatic and worried using a gas mask would bring on an attack.  Touch wood, but in 4 years I've never had an Asthma attack whilst playing, and lets hope it stays that way.  Anyway I digress, but I did find a pic of me from that night: 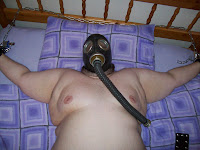 Since then, gas masks feature fairly regularly in our play, especially as my partner has a thing for using them for a bit of forced smoking (something I'll never partake in because of, you guessed it - my Asthma).  My favourite though, is when I'm put into a gas mask, a hose is attached and the other end of the hose is stuffed into a smelly shoe/trainer and/or smelly sock.  I really get off on that.

Something I would like to possibly try is putting duct tape around the mouth and then put the mask on with or without hose.  Not sure how practical or safe doing this would be.  Has anyone tried it?  And if so, did it work?

BearIn2Bondage
Just a chubby bear with a love of bondage and big men, hoping to connect with others who share the same!

Material is posted in good faith and with links to originating sites, but will remove vids/pics/stories if asked.

Other Blogs Of Interest